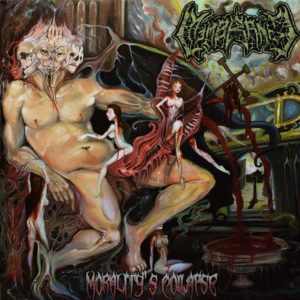 Membrance was born in 2012 in Venice (Italy) from Davide how a Death/Black Metal crossover project, but in 2014 changed fold in a old school Death Metal band with rock’n roll and blues influences; genre reinforced by the arrival of Pietro on the guitar in 2015. After a short but intensive period of underground esibitions and demos recordings, in 2017 the band suffers the last little line-up change to see the entry of Giovanni at the drums and to record his first full-length self-produced named Abyss, released later from Envenomed Music. Thanks to this record the band participates at some festivals such as Metaldays 2018 in Tolmin and Winterdays of Metal, continuing also as a support for some big bands on tours in northern Italy like Marduk, Brujeria, Necrodeath and Nanowar of Steel. In 2019 Envenomed Music, with the support of Narcoleptica Productions released the second Membrance’s full-length named Morality’s Collapse, made by the famous 16th Cellar Studio from Rome (renowned for the excellent works of Fleshgod Apocalypse, Hideous Divinity and many others). In parallel Membrance continues a fierce live activity in Italy, like an open-act of Entombed A.D., some others underground festivals and classifying himself at the national finals of Wacken Metal Battle Italy 2019. The kind of music proposed is more personal than a simple Death’n Roll like they usually present themselves; the stylistic roots sink into a old school Swedish Death Metal mixed in jazz-blues riffs, but the influences are also attributable to many other genres like Thrash Metal, primordial Heavy Metal rifs, and modern mold Metal. Their mark of recognition is the fake blood that covers all their bodys, as if it had rained blood from the sky! But the attitude and approach are purely thrasher, full of sarcasm and irony. From the sick and crusted lyrics on zombies, dead waters and rot is possible to see a deeper criticism about the social situation of their city, and their anger over the dark times that it are living.

Scroll Up Scroll Up